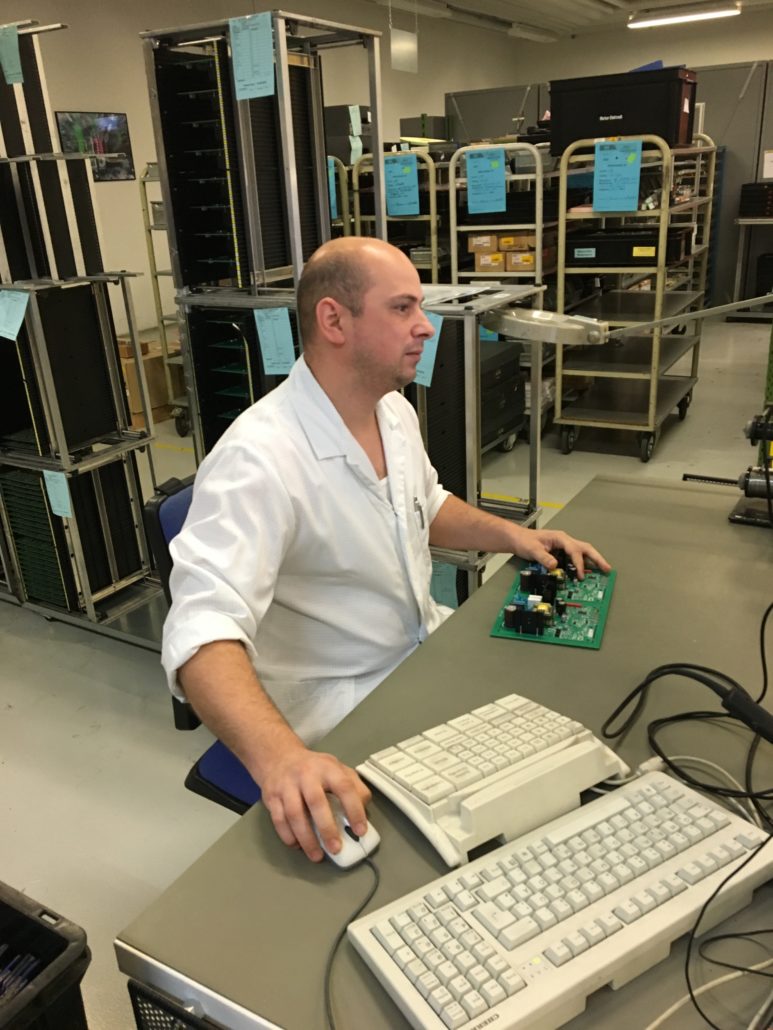 Thanks to some open-minded people, the computer scientist Rami Krenbeh returned to work after fleeing from Syria.

In the end, Rami Krenbeh’s story is a bit like a fairytale:

The refugee from Syria, who arrived in Bühlertal’s refugee accommodation in the former hotel "Badischer Löwe" in November 2014, is today working successfully as an electronics technician for Merkur Elektronik GmbH in Baden-Baden. A few months ago, his wife and kids were able to move to Germany, too. They now live all together in a flat in Bühlertal.

The story was a success, but not thanks to the authorities. Let’s rather say: It succeeded despite the authorities. A great many of refugees fail to return to work due to the tremendous obstacles put in their way by the authorities. The same is true for Rami Krenbeh. Nevertheless, a lot of committed helpers made a career possible for him. However, let’s start in autumn 2014, as the young father arrived with one of his little sons in Bühlertal. Right from the start, he (like the majority of refugees) made it very clear that he wanted to work as soon as possible! That was when a volunteer contacted Preis Ingenieurbüro GmbH. Karl and Maria Preis as well as the staff members immediately liked the idea of an internship after meeting with Krenbeh. Especially because Preis Ingenieurbüro GmbH already had employees with immigrant background who offered to support the refugee from Syria. Even the language barrier was not too much of an obstacle: The employee Sadiq Arbaoui from Morocco and the apprentice Ege Beyazoglu with Turkish roots helped the Syrian with Arabic and Turkish and translated all the essential information.

However, it turned out that goodwill alone was not enough: Krenbeh and the Preis family needed a lot of patience and tenacity to get the authorities to act. As a not yet recognized refugee at that time, Krenbeh was not allowed to do an internship and neither did he have a work permit. After a few months of waiting and Krenbeh’s recognition as a refugee, he was finally able to start work as a trainee, or more precisely, he was allowed to watch the others work without taking action himself. Six weeks later, he was finally allowed to work as a minor employee and actually start working. In doing so, Krenbeh especially demonstrated his ability in repairing of computers and other instruments, as he had been previously employed in a computer company in Syria. The idea came up to find employment for Krenbeh where he could use his abilities properly. Preis contacted Ralf Wörner, head manager of Merkur Elektronik in Baden-Baden. As a happy coincidence, Wörner was just looking for an experienced computer scientist. Soon, Krenbeh was given an employment contract. Wörner: "We employ Rami Krenbeh in the service and AOI section, where he repairs broken components. Due to this large field of work, he needs to learn a lot at the moment, but he gladly accepts the help of his colleagues. And they compliment his helpfulness."  According to Ralf Wörner, the quality of work is very good but there is still room for improvement in terms of speed. "Overall, we are happy to have a refugee with us and help him to settle in to his new surroundings."

For Rami Krenbeh, the time of financial dependency on district offices and the "Job Center" are over, two years after his arrival in Germany.

Photo: Rami Krenbeh, two years after fleeing from Syria, at his job at Merkur Elektronik in Baden-Baden.